How the KMT is campaigning for Taiwan’s undecided voters

The other day, I found this Kuomintang campaign flyer in my mailbox. It looks like a good example of how the party is trying to win over undecided voters by focussing on issues like economy and administrative performance.

Divisive topics like the future of cross-strait relations, national identity and self-identification, references to the Chen Shui-bian era or ad-hominem corruption accusations are largely avoided on this flyer.

By clicking on the pics, you should be able to see the full-res version and read the text. 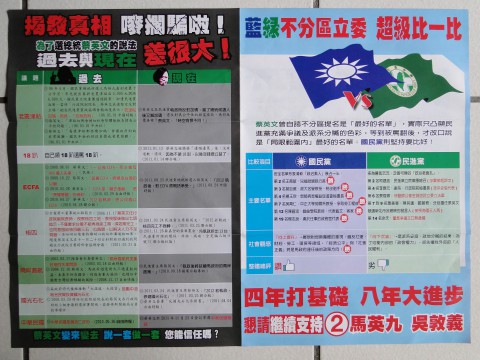 The front page (on the right in the above picture) contrasts some of the KMT’s and DPP’s candidates for the legislator-at-large seats in the parliamentary election. It was apparently a smart move by the KMT to include some well-respected representatives from outside the political field, even forcing the DPP to reluctantly call this step “commendable”.

The back of the flyer (on the left in the above picture) depicts DPP candidate Tsai Ing-wen as unreliable and constantly changing her opinions. Quoting from media publications, the KMT contrasts Tsai’s former (left) and more recent (right) statements regarding these topics:

Comparisons like this are an easy way to discredit a political opponent – look long enough, and you will find examples for every politician contradicting himself. The average reader has no way of verifying if those quotes have been taken out of context or not, nor is he interested in doing so. 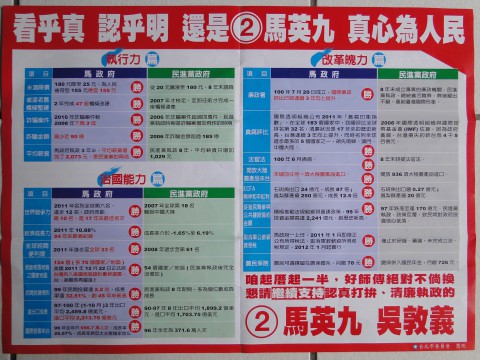 On the flyer’s inside, the KMT touts its government performance in the past four years, mostly by quoting statistics and contrasting them with the DPP administration. I will just pick some examples.

Of course, you can prove – or refute – almost everything by carefully selecting the “right” statistics to quote. Politicians and campaign managers are especially good at that, not only in Taiwan.

Also, there is no law requiring parties to be fair or balanced in their campaigning. I remember well how, during Germany’s 2005 campaign, then-chancellor Gerhard Schröder ruthlessly attacked Angela Merkel’s superior tax concept, ad nauseam raising the example of a poor single mom night nurse who would have to pay higher taxes if the conservatives got their way. In the end, Schröder still lost, but it might have been this zeroing in on an actually irrelevant side aspect that cost Merkel’s party so many votes she had to enter a Grand Coalition with Schröder’s party.

I think this KMT flyer shows – amongst other things – that campaigning in Taiwan can actually be quite similar to Western democracies. Like everywhere, parties selectively use (sometimes misleading) statistics in order to win over undecided voters. But at least, they can appeal to reasoning, not only to deep-seated resentments. If they choose to do so.

Please keep your comments focussed on the matter at hand – the content of the flyer and its implications for the current campaign. I will not publish partisan bickering or comments that serve no other reason than to glorify one party/candidate or discredit the other. 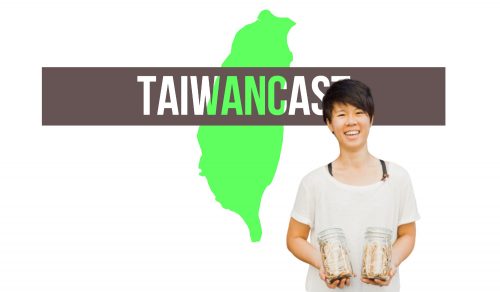 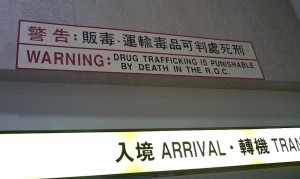