I recently had the opportunity to have a little tour around the Taipei International Flora Exposition grounds that are still closed to the public. The Expo will open on 6 November 2010 and last until 25 April 2011 (Official Website). 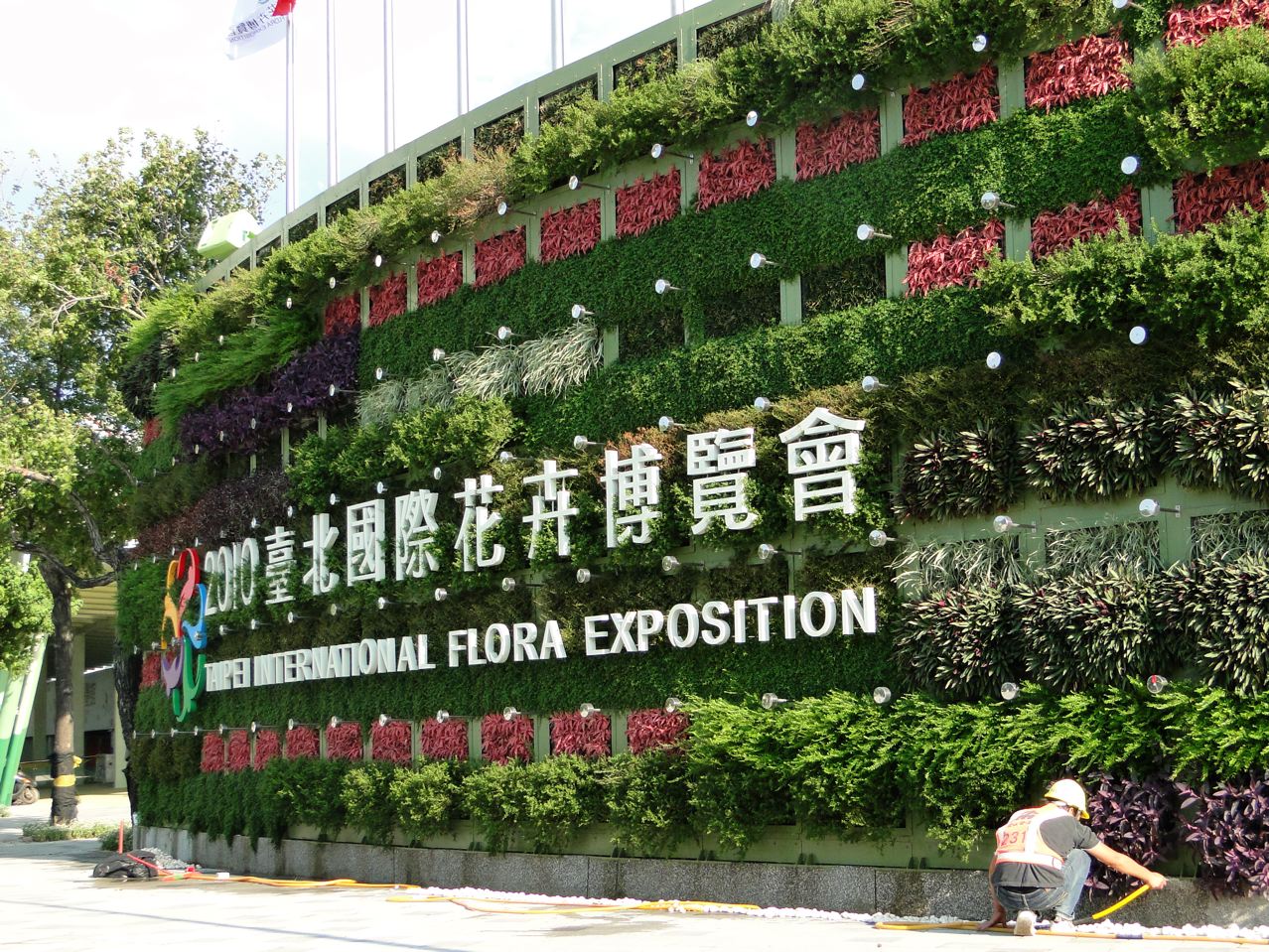 I am fully aware of the current controversy sorrounding the Flora Expo. The question who paid riculously overcharged prices for flowers etc. was not what made me want to check out the grounds, however, and it is also not the subject of this post.

I was researching for a German article about how quality of life in Taipei has increased over the last 15 years or so, and how this development will go on. So I was interested in the question: Will the Expo bring lasting improvements to Taipei’s citizens even after it closes?

Elections are near (27 Nov.). The Taipei City government is mighty proud of the Flora Expo and hails it as the greatest thing that ever happened to Taipei. To the opposition, it is a giant waste of money, a mere campaigning tool and proof of ever-lingering corruption. My guess is that the truth is somewhere in between.

Now that the ideology is out of the way for the moment, let’s have a look at the plan. 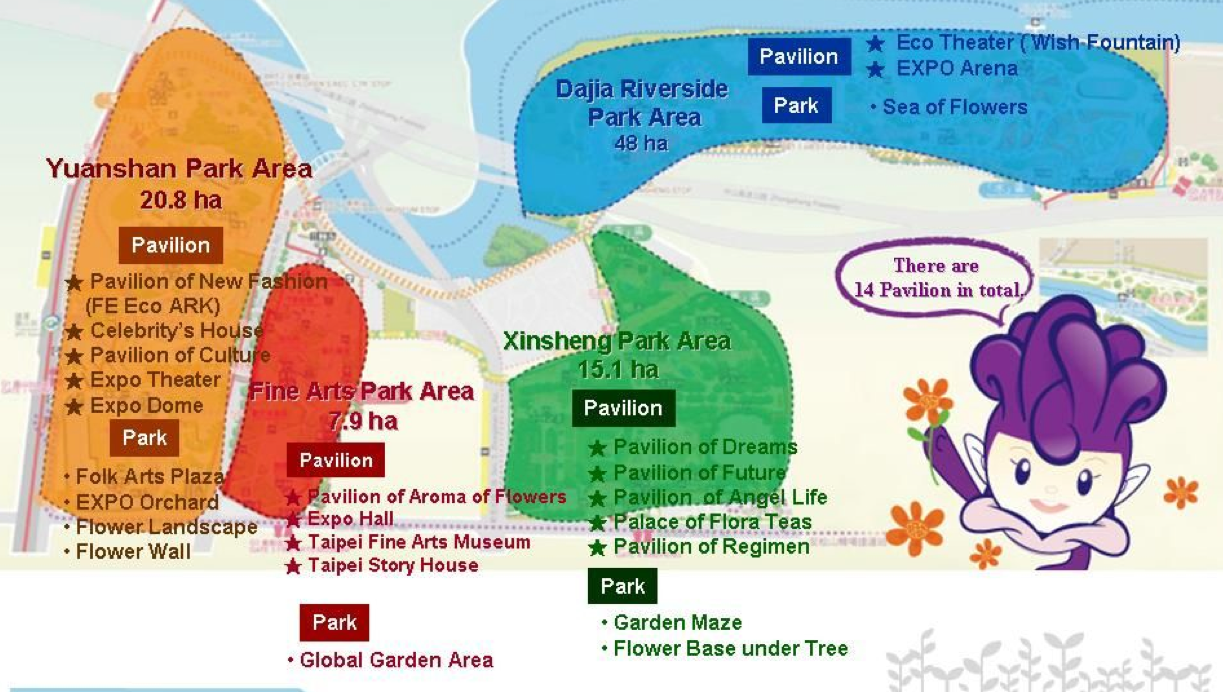 The Expo grounds encompass 91 hectares of which, according to the organizers, 71 will be „covered with greenery“. They stretch east from Yuanshan MRT station, which is the spot from wich most of us probably have seen the changes that have already taken place. It is also from where I entered. 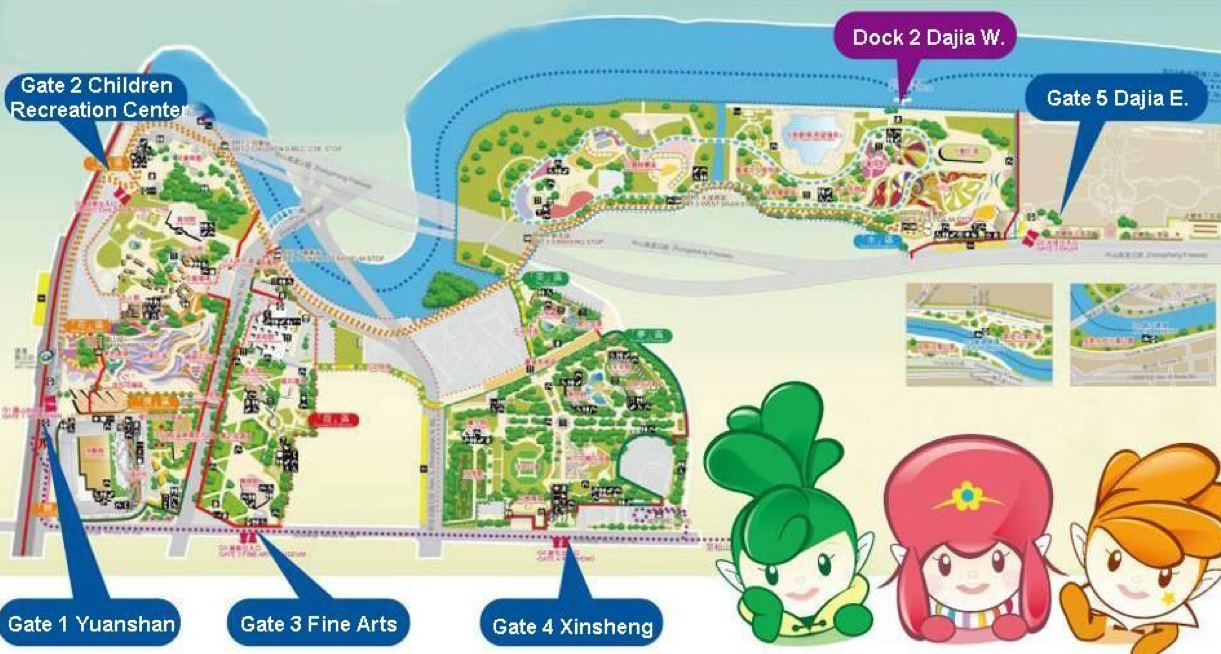 All four major areas of the Flora Expo have been used as parks for a long time, which also is a point of criticism: Why spend so much money to close large inner-city parks and give them a make-over, instead of building new ones?

I have not been a frequent visitor of the parks before the remodeling began. I recall seeing a DPP rally in front of the Yuanshan Football Stadium in March 2008. And I recall that large parts, at least of the Yuanshan Park, were wide stretches of lawn, with few trees or footpaths. Now the Taiwanese, given their aversion to sunbathing and barbecuing (except at Mid-Autumn festival), do not seem to value lawn in parks very highly. Apparently, many people prefer paved foodpaths, benches, flowerbeds etc.

Well, that is what they will get. 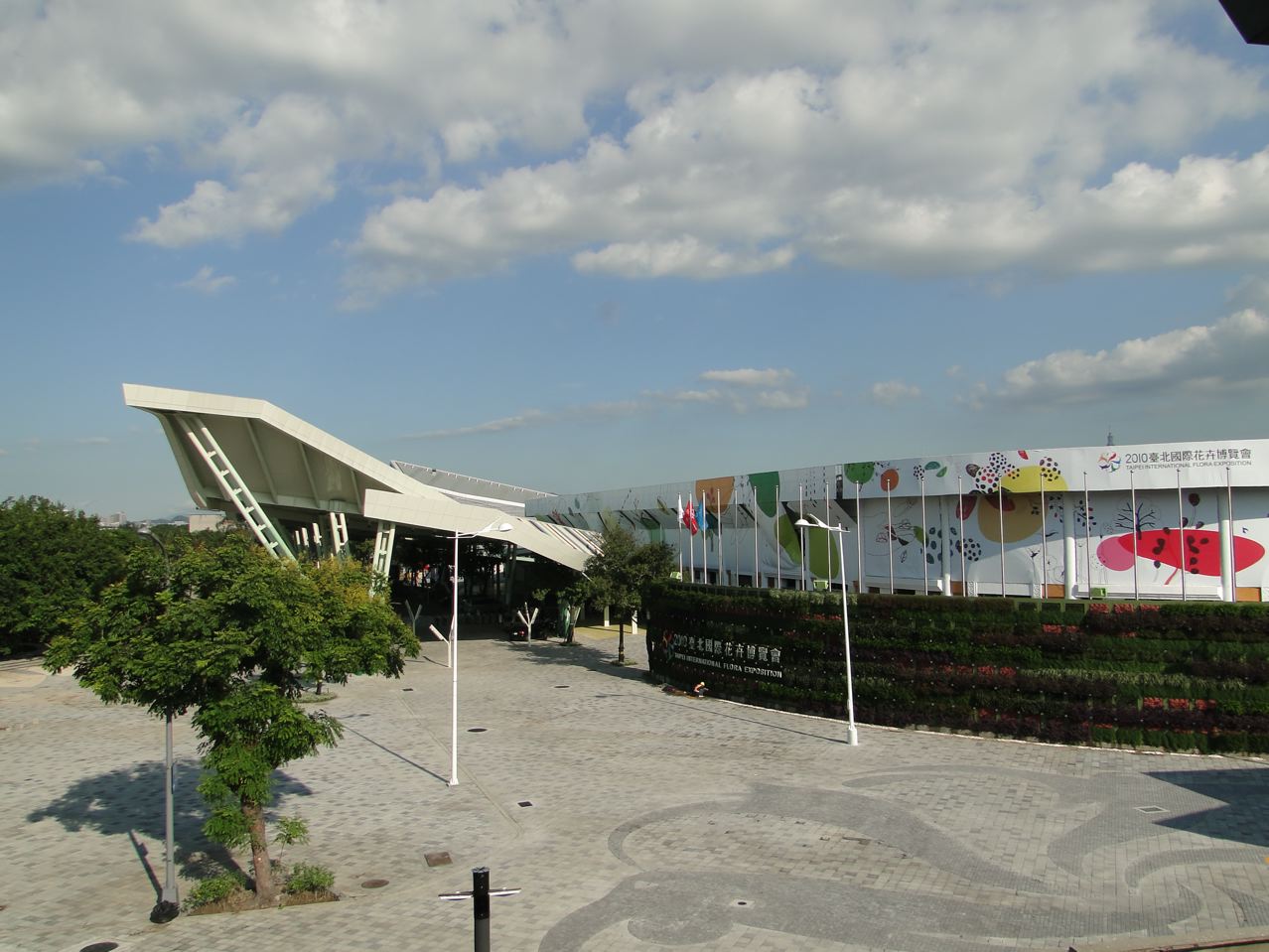 This is the main entrance area as seen from the Yuanshan MRT platform. To the right is the former Yuanshan Football Stadium. The actual tickets booths are under the roof to the left. Because the organizers are hoping for eight million visitors (including 400.000 foreigners) to stomp through this spot, it is perhaps understandable that pavement is preferred to greenery.

One of the most striking changes is the disappearance of a complete road.I am talking about the stretch of Jiuquan St. that used to connect Yumen St. (to the west, with the MRT) and Zhongshan N. Rd. (to the east) and that ran alongside the stadium. Google Maps still has it (you can also see the old layout of Yuanshan Park): 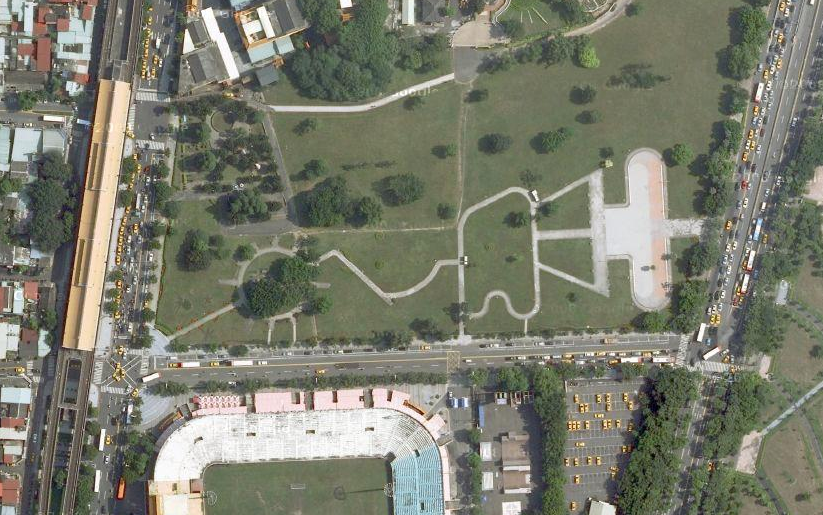 This road had to go to make room for the entrance area, the roofed structure with the ticket booths, and a pedestrian bridge crossing Zhongshan N. Rd., connecting the Yuanshan and Fine Arts Park areas. I very much hope it will not come back after the Expo is over. It would be the first time I am aware of that a road in Taipei is completely given up for the sake of pedestrians. This, to me, will be one of the most important criteria to judge if the then-elected city government is seriously thinking about the future or not.

The former Yuanshan Football Stadium only resembles a stadium by its shape now. It has been transformed into a multi-purpose building complex with an open air area. This is what the inside looks like now, standing on the former pitch. 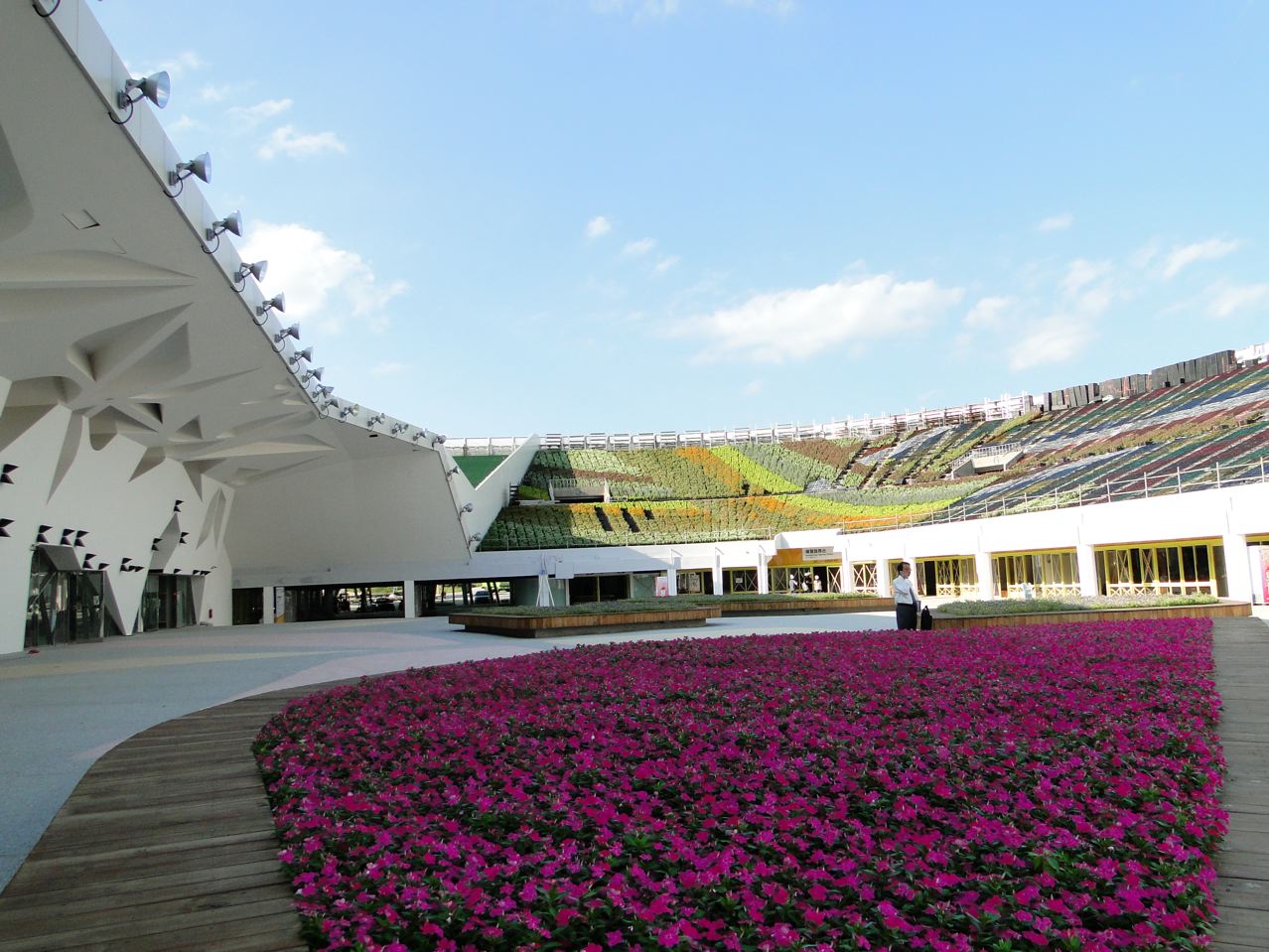 The stands have become a flowerbed of sorts, the lawn is gone, and more than half of the area is occupied by a building (left) that will house exhibition halls, restaurants, shops, toilets and the Expo administration ofices.

This place will never again be used for football matches, that much is obvious. Pretty senseless to protest against that now, like some Taiwanese Football officials recently did. (Besides, football matches in the Taipei Stadium or the Kaoshiung World Games Stadium would be the best thing to happen to these two venues.)

Right next to the stadium there now is a building that has already caused some foreign media to give report on the Flora Expo before it even opened (report with video). It is the EcoArk, a building with walls made of 1.5 mio. recycled plastic bottles. 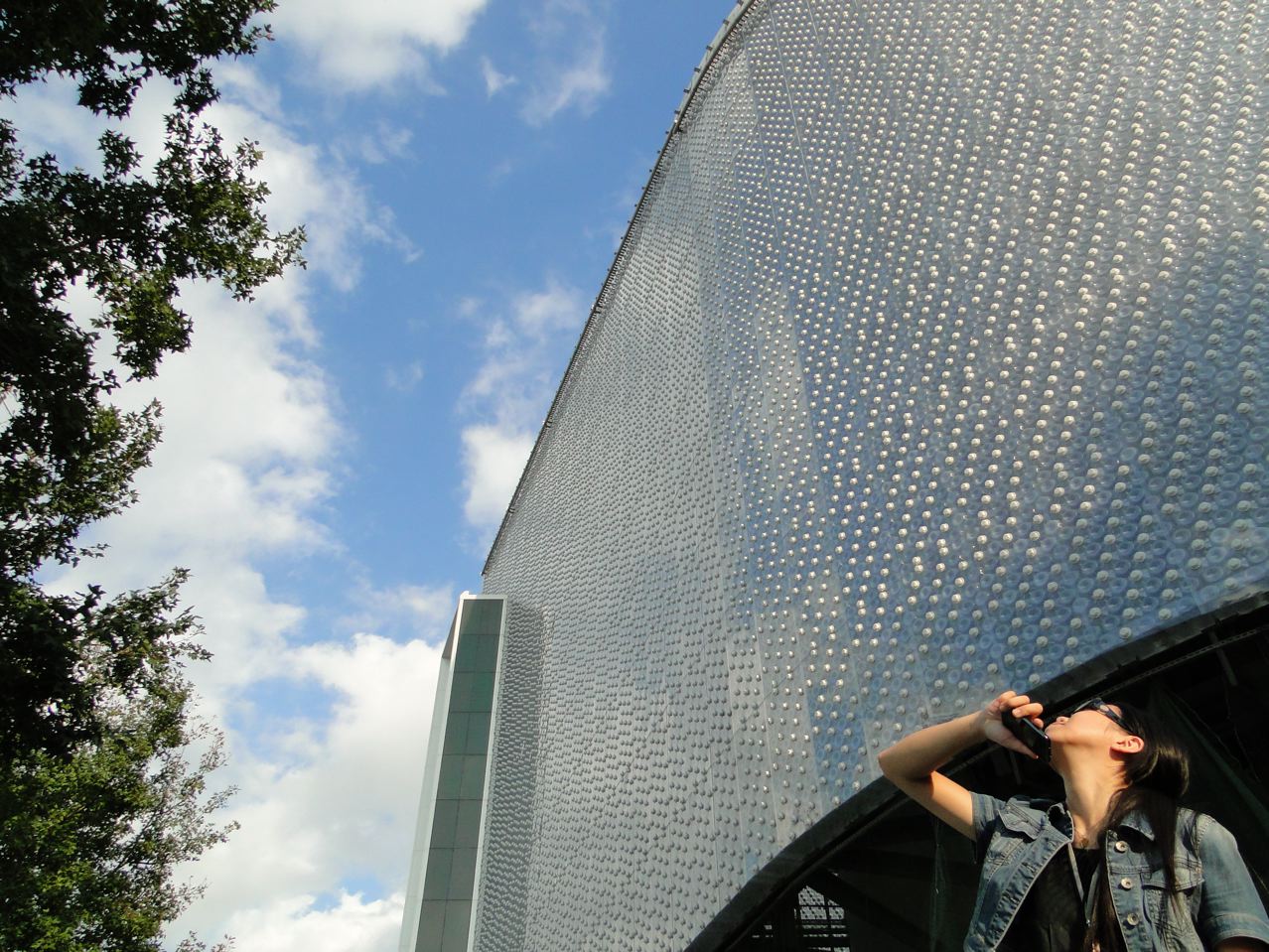 The EcoArk will serve as a showcase pavilion for new ways of constructing buildings. With solar panels for energy and open water circulation instead of air condition, it does not consume a lot of energy, which makes it quite different from most buildings in Taiwan.

The recycled PET bottles are formed into transparent „bricks“ that look a bit like water cooler bottles. Apparently, you can use them to build walls like with Lego blocks. The idea of using plastic garbage as building material seems to be something Taiwan could turn into an industry of itself. 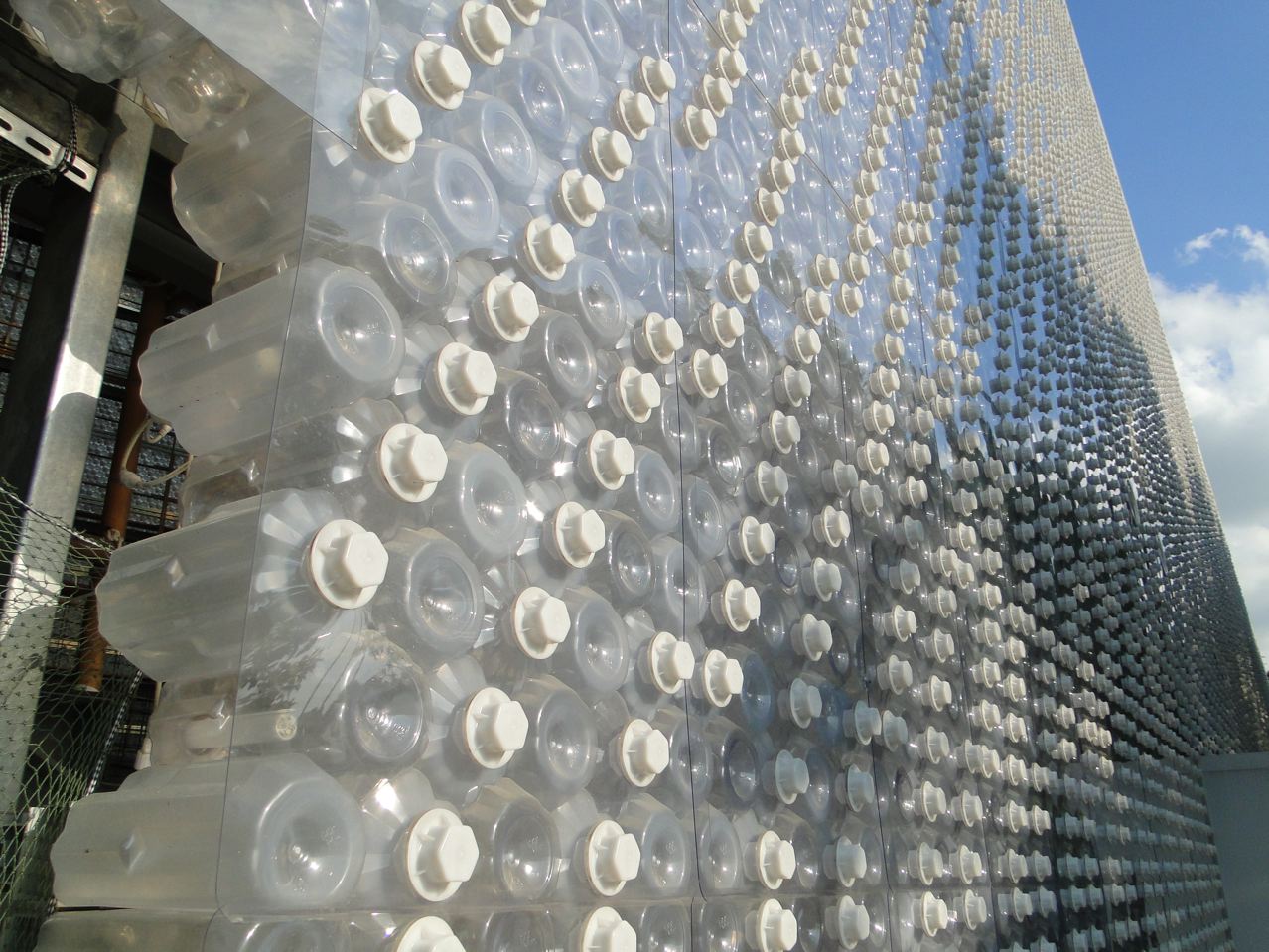 The building is 30 meters high. Inside, there will also be some art or fashion performances. Notice the sunlight streaming in.

The Eco Ark belongs to the Far Eastern Corporation, which will dismantle it after the Expo and transfer it to another location. 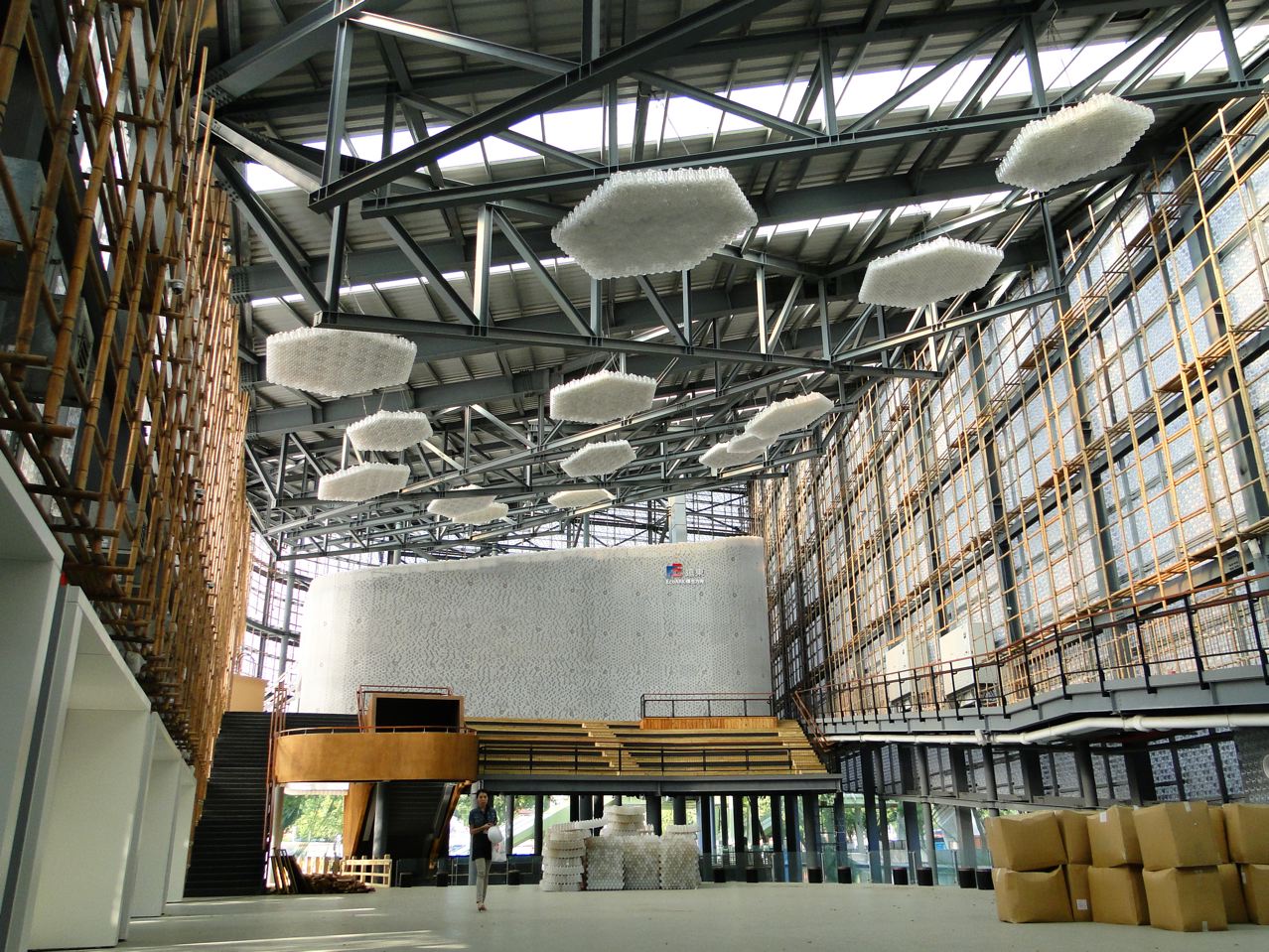 The EcoArk as seen from the pedestrian bridge over Zhongshan N. Road: 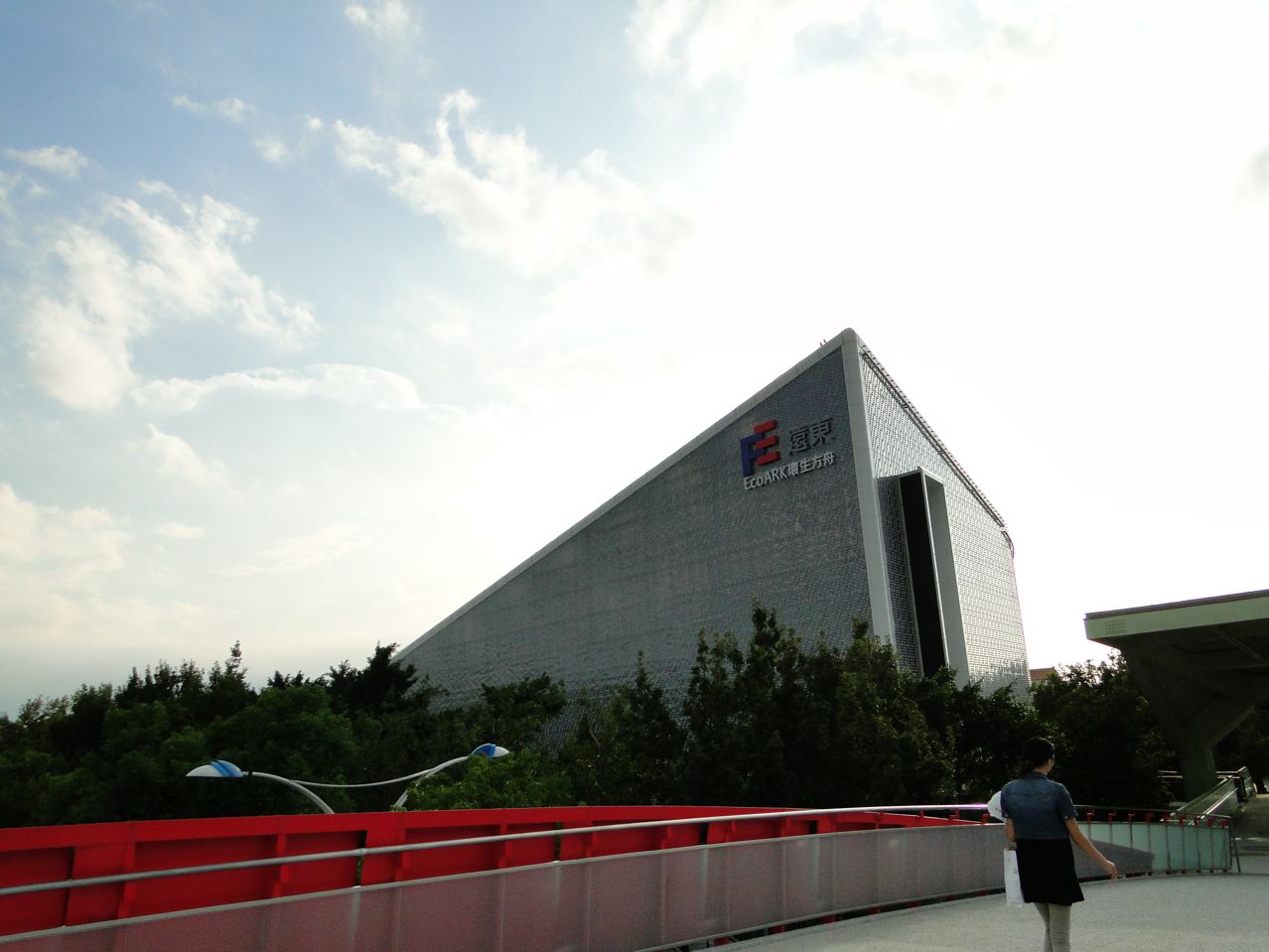 The park next to the Fine Art Museum has also been completely redone. This is the view from the pedestrian bridge. 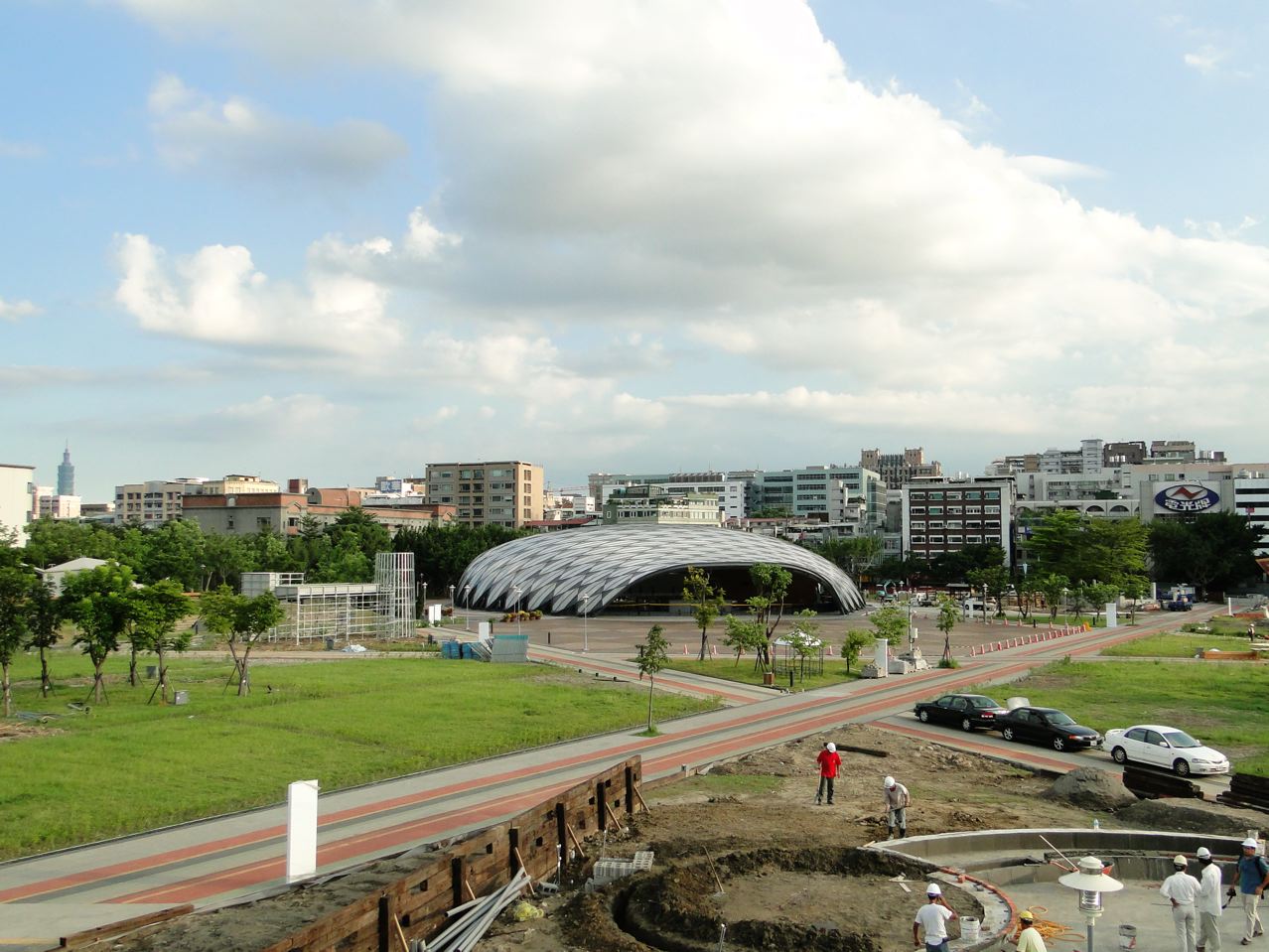 Lots of new footpaths here, too. Also, some of the building facades surrounding the grounds got a much-needed cleanup. The actual flowers are only being planted as i am typing this. Someone was smart enough to wait with this until the typhoon season ended.

In the big pavilion one above, there will be music and dance performances. The newly constructed pavilions are to remain after the Expo closes, serving a restaurants, restrooms etc.

Looking towards the north, lots of construction still going on there, too. 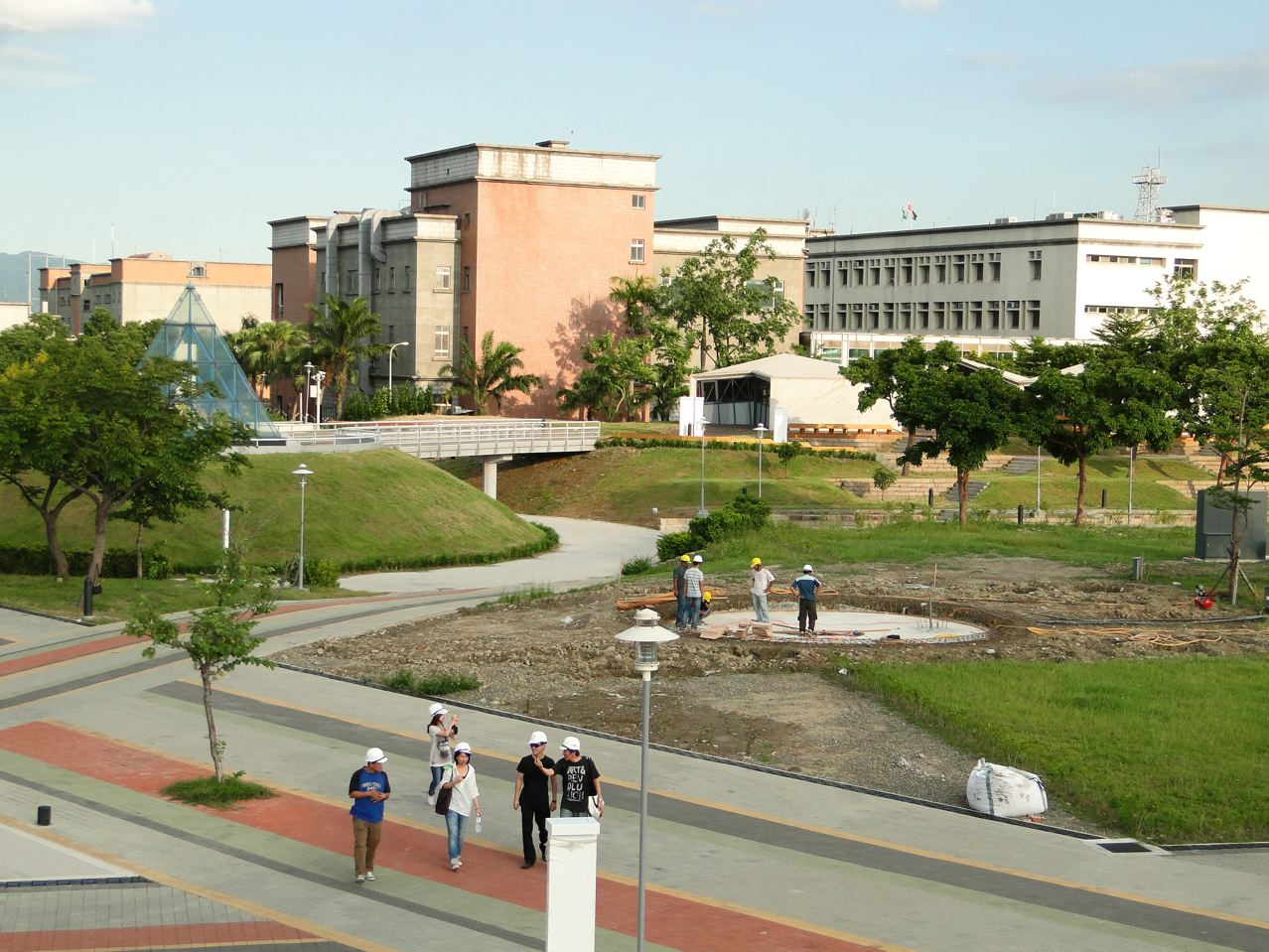 It still is not easy to imagine what the Expo area will actually look like with everything in place, and even harder to imagine the situation after the actual event is over. I hope that Taipei uses every opportunity, including this, to become a greener and nicer city, with less space for cars and scooters and more for human beings. The citizens really deserve it.

To everyone who is complaining about the „destruction“ of the original parks: How about focussing your energy on something that is more important – the fact that Taipei wants private investors to build the „Taipei Dome“ a giant hotel, shopping and arena complex, on one of the last open spaces left in the city centre, across from Sun Yat Sen-Memorial Hall on Zhongxiao E. Road. That really is a shame. The place should be turned into the next Daan Forest Park, like some Green Party politicians (and I do not mean the DPP) have suggested. 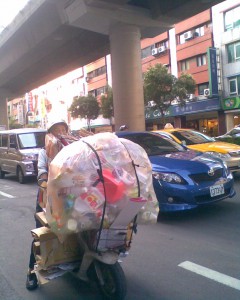